Most companies secure their enterprise to ward off cyber adversaries by using perimeter defenses and blocking known adversary indicators of compromise (IOC). Heavy reliance on collecting and black listing using IOCs (e.g., IP addresses, domains, malware hashes) as a way to detect and block the adversary provides only limited protection. For example, the Verizon DBIR 2016 Report[1] states that 99% of malware hashes are seen for just 58 seconds or less. A comprehensive security plan does not begin or end at the perimeter, but instead leverages an understanding of the full lifecycle of a cyber adversary.

Adversary pre-compromise activities are largely executed outside the enterprise’s field of view, making them more difficult to detect. Cyber adversaries case their victims using the wealth of information available on the internet and take advantage of an enterprise’s third-party relationships to gain access to a target’s infrastructure. Defenders must expand their ability to monitor and understand adversary actions outside the boundaries of their enterprise.

Building on ATT&CK®, PRE-ATT&CK provides the ability to prevent an attack before the adversary has a chance to get in. The 15 tactic categories for PRE-ATT&CK were derived from the first two stages (recon and weaponize) of a seven-stage Cyber Attack Lifecycle[2] (first articulated by Lockheed Martin as the Cyber Kill Chain®[3] ). This framework captures the tactics, techniques, and procedures adversaries use to select a target, obtain information, and launch a campaign. The framework lists the ways that adversaries perform each tactic and provides the ability to track and organize adversary statistics and patterns. Ultimately, this arms defenders with a broader understanding of adversary actions that they can use to determine technical or policy-based mitigations and evaluate the quality and utility of cyber threat intelligence data sources.

PRE-ATT&CK provides defenders with the ability to answer questions such as:

PRE-ATT&CK is a constantly growing common reference for pre-compromise techniques that brings greater awareness of what actions may be seen prior to a network intrusion. It enables a comprehensive evaluation of computer network defense (CND) technologies, data, processes, and policies against a common enterprise threat model.

We do not claim that PRE-ATT&CK is a comprehensive compilation of techniques, only an approximation of what is publicly known. We invite and encourage the broader community to contribute additional details and information to continue developing the body of knowledge. Contributions could include:

See the Contribute page to learn how to get involved.

The result will help focus community efforts on areas that are not well understood or covered by current defensive technologies and best practices. Developers of current defensive tools and policies can identify where their value and strengths are in relation to the PRE-ATT&CK framework. Likewise, cyber security researchers can use PRE-ATT&CK as a grounded reference point to drive future investigation.

PRE-ATT&CK describes 15 categories of high-level tactics, derived from the first four stages of the cyber attack life cycle. With a more granular understanding of adversary activities, defenders can make more informed decisions about the potential technical and policy-based mitigations they can adopt to reduce adversary success in the pre-compromise phases of the cyber attack lifecycle, thus reducing targeted attacks. Defenders consume multiple cyber threat intelligence reporting sources with varying detail and lack a consolidated means to assess their value. PRE-ATT&CK provides the structure and breadth required for defenders to track adversary behaviors and assess data sets that will increase their insight into adversary activity. 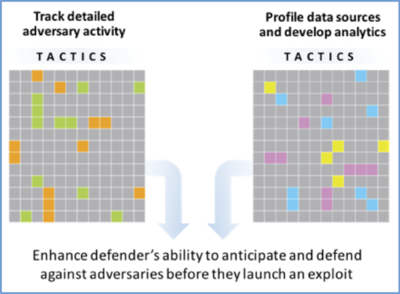 PRE-ATT&CK is associated with ATT&CK since it adopts the same model structure and complements ATT&CK by focusing on the left of exploit stages of the Cyber Attack Lifecycle. PRE-ATT&CK and ATT&CK have several fundamental differences, namely: